The poor people of Bharath need food, shelter and small small necessities of life. They are hungry. They want to be free from hunger or Bhuukh-Mukhta.

But Gurus and seers and the rich are not interested in these necessities of the poor .They talk big big things. They talk about pranas, chakras, muulaadhara, manipura, kundalini awakening and samadhi. They don't do anything for the poor to be Bhuukh-Mukhta.They want to make them direct Jeevan-Mukhta. 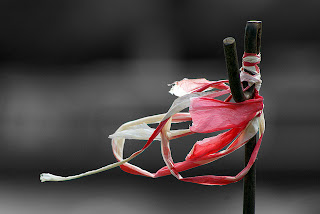 Repent, You Sinners, Before "Being Caught Up"

With no idea of destination
in a lonely busstop
on a frozen bench with
"bench ad works"
I lean for hours
waiting for a bus
on a double holiday.

Who is howling in to my ears,
a bear?
a chance here
or a wild fox?

A small tornado
unpredicted by the forecasters
an unwelcome guest
like a cobra
in an emptied house
stares at me
whirls in a destructively high speed
and sweeps the earth in no time.

Ash and foamy white
turns silver
up it goes like a temple fireworks.

And on the bottom
in white and black
floats a paper
grabbed from the busstop
"repent you sinners,
repent
before Being Caught Up."
Posted by Azeez . at 10:47 AM

Existential Crisis of a New Immigrant

IThis Ayah means, O Jews! Remember that Allah sent His torment on the village
that disobeyed Him and broke their pledge and their covenant to observe the
sanctity of the Sabbath. They began using deceitful means to avoid honoring the
Sabbath by placing nets, ropes and artificial pools of water for the purpose of
fishing before the Sabbath. When the fish came in abundance on Saturday as
usual, they were caught in the ropes and nets for the rest of Saturday. During
the night, the Jews collected the fish after the Sabbath ended. When they did
that, Allah changed them from humans into monkeys, the animals having the form
closest to humans. Their evil deeds and deceit appeared lawful on the surface,
but they were in reality wicked. This is why their punishment was compatible
with their crime. This story is explained in detail in Surat Al-A`raf, where
Allah said (7:163),
have some Russian friends. Very good ones. six feet tall, redcolour. gentle.Very friendly. They are , I have found , scared, doubtlful of everything. like a white pig. They are very friendly. They like to talk about anything except their religion.
They never tell even their wives that they are the Jews. Why, the Jews are scared to declare their faith.
Is Holocaust mania still haunting them?
No, they are afraid to declare even before that.
In fact , from the time of Moses. They know that they cheated Moses, while publicaly declaring their obedience.
They cheated Ten Commandments, They violated the sactity of the Sabbath. God commanded them not to fish on the Sabbath Day. They didn't fish. but they cornered the fish and
The commandment to observe sabath , a day of rest , was given to the Jews in the Old Testament.
There were originally 40 activities prohibited on Sabath day. They made one less later.
Of these prohibitions the Jews
They always find ways to violate the laws. They constantly tried to find the loophole of the law. They said toarah menat this meant that.
one was trapping
On sabath day the jew is not alloweed to fish. So He trapped the fishes. But trapping is an activity prohibited in the Torah. What is this God asked us to take sabbath on the sixth day. yes w e obey yahova, so we observe the saabath. We don't fish on sabbath day.
But they trapped the fishes on Saturday only to catich them on then next day.
But trapping is also an activity prohibited by God.
So the Jews found different interpretations . By trap, God meant only animals. this is not wild animals. so trapping of fish is allowed. But they know that god blessed the seventh day. god made the seenenth day holy
Posted by Azeez . at 4:06 PM