I have read some articles since the economic crisis of 2008, but this 'how Goldman gambled on starvation 'is a good one which connects the US and MNCs' derivative business with the hungry mouths. The US manufactures are siphoning corn, oats and other food products to ethanol fuel industries, which are growing in thousands in the oil-deficit US. They know that Islamic countries are no longer safe havens for cheap oil. After second world war the US and the UK ‘rebuilt’ Europe. It needed huge energy. All this they looted from poor Arabic land for a 20 cents a barrel. The ignorant Sheikhs and Sultans drained the resources of the people for decades .Now it is not that easy. Terrorism is growing against the West. A Caucasian, however gentle he is, is living in an Islamic country with a fear of being abducted. They cannot place puppet government there any longer for serving their interests. The only sad thing is, along with the battle against imperialism, Islamic fundamentalism and terrorism is growing in those countries .And people all over the world are suffering. Muslims lost their ears and eyes. They lost line. The Transnational corporations , like Christian imperialists who travelled all over the world in 1500s in search of virgin land, now travel to all African countries and other developing countries for commodity markets. The British imperialists procured raw materials from their colonies, produced goods in those colonies for the western markets, pumped profits, built empires and Christiandom with the sweat of poor and illiterate and ignorant non-Christian people all over the world. When the old game is no longer working, now the MNCs are playing a new imperialist play. They go to poor Ghana, say, and buy all copper ores. They trade this purchase contracts in the derivative markets. The units are then traded in the secondary derivative and financial markets all over the world, including India for more and more money.The greedy investors acquire this stocks and derivatives. When we India is striving to reach 18000 index we don’t remember that the growth is not actual growth but the blood money of the foul play of the market players. Here in the US, profits are given tax benefits if given for charities. Huge amount is pumped out to third world countries to Christian organisations and other faith-based organisations to spread the gospels and buy pagans. In Africa, in India, in Sri Lanka, in Burma, in Indonesia, in all countires. The evangelists declared that their goal is” Christ to every Soul by 2000.”This and the continuing programs are financed by foreign funds.
Our India government doesn’t make a proper enquiry into this . They don’t investigate the source of faith based NGOs and the source of acquision of all major land areas.
Posted by Azeez . at 9:44 AM

You sit here?
Yes.
Can you move?
Why?
We want to make a building before the ocean-front
Boo! Where's the ocean?
It's coming in a week.
Posted by Azeez . at 8:22 PM 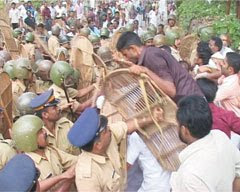